Visit the CLUB SHOOT Section and see the latest 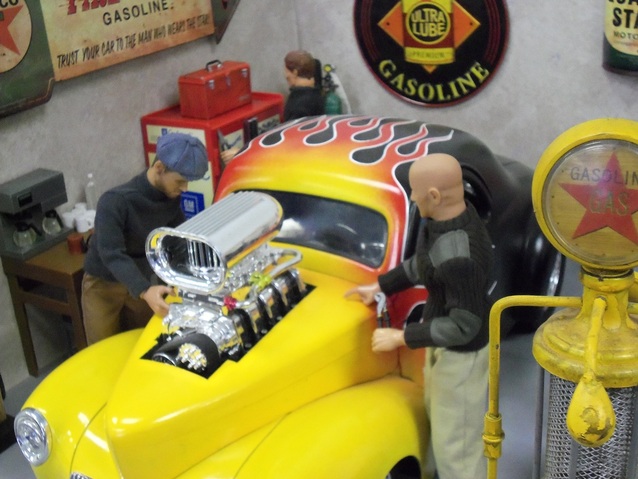 The Evil Doctor built this AWESOME Garage and equipped it with all kinds of cool EYE CANDY.  I brought my flamed Willys Coupe, a few figures and a couple of tool boxes and tools.  Special Thanks to the Evil Doctor for this great setup and photo shoot.

Getting started in this hobby of 12 inch action figures 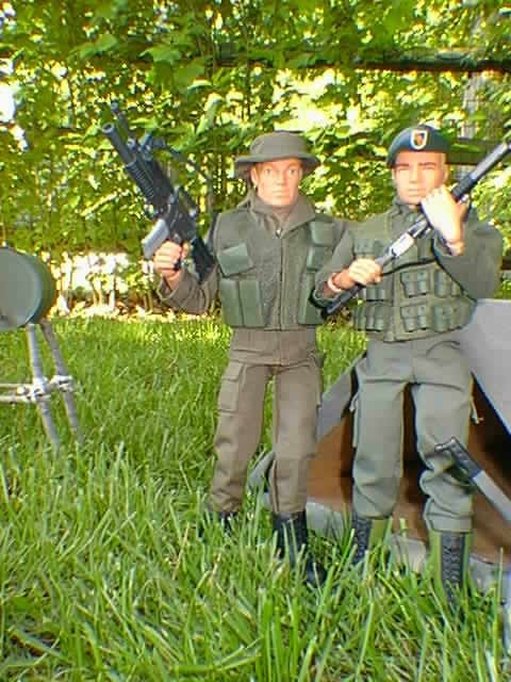 Hasbro & 21st Century figures shown
Back in the 1990's, I bought some toys for the grandkids to play with when visiting our house.  They didn't need to pack toys from Pennsylvania and Colorado.  After I bought Hot Wheels and Lego's I decided I had enough stuff and headed to the checkout counter.  As I walked out of the aisle, I noticed Hasbro has re-introduced their 12 inch GI-Joe figures.  I had to get some for the boys.   When the kids came to visit they loved the sellection of toys I had bought but most of all, the GI-Joes.  I would sit in my chair or the couch and plan adventures for the boys to take their Joe's on.  This would stimulate their imaginations and get more adventurous.  After the kids went home, they would call from time to time and talk with Grandma.  One particular night, the oldest grandson (5) asked to talk to me.  When I got on the phone he said in a hushed voice,,"how are the guys?"  "What guys", I replied ?  "The GI-Joes", he said.  I told him they were all boxed up and waiting for him to came back and visit and play with them.  He was very dis-appointed.
You see, he had seen the Toy Story movie, where the toys played by themselves when the kids weren't playing with them.  He thought the GI-Joes should be having more adventures while he was back home. 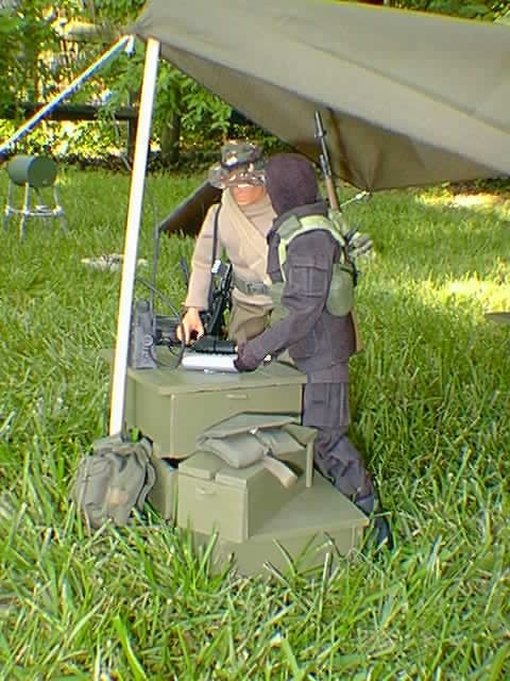 This got me thinking.  I took the figures outside and made a base camp and posed the figures around the camp and took pictures of them.  Then I had the pictures developed and sent them to the boys in a letter,  so they could see the adventures the guys were having, even without them there to play with them.  The letter with the pictures arrived and the boys went crazy...they told their mother to pack their bags, they were going to Grandma's house.
I started looking online for more figures and accessories to give the boys for Christmas and birthdays.  I started finding new companies emerging and I began getting interested in making a couple figures for myself, for display only.
As time went on my interest grew, my photography skills improved and "My" collection grew.  Oh sure I still kept the figures for the boys (seperated from my collection).  My collection grew and I discovered if you couldn't buy something, you either made it yourself or went without.  I think my collection is small compared to others I know but there are 200+ figures, 15 horses, 3 helicopters, 2 tanks several trucks and Jeeps from different periods and then there is custom stuff that I made...like the flatboat and covered wagon.  These pieces are used in elementary schools to teach 4th graders about Ohio History and have been on display in a couple museums. My figures represent early Americans, Civil War, WWII, Vietnam and Modern, including civilians.

Then I found GreenLeader's Site and all the pictures guys like LT, Devel 505, Capt. Fisher, Pointman, One Shot and many, many more, were taking of their figures and collections and the rest is history.

And that's how I got started..

and then it just got worse... 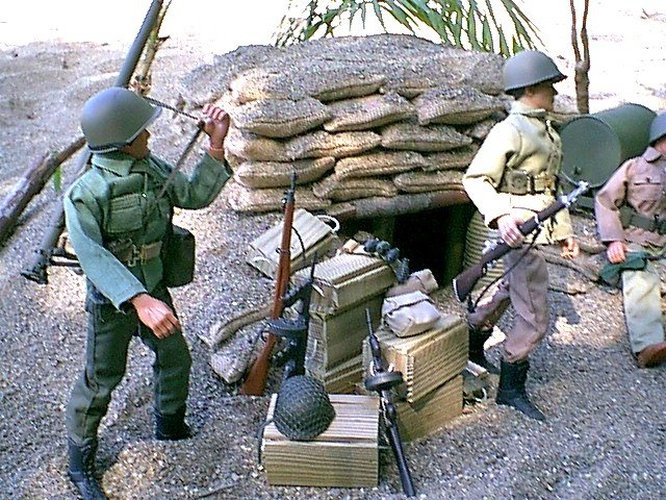 I started utilizing the sand volleyball court we have in our neighborhood and doing all kinds of outdoor photo shoots.  I began making crates and buying anything I could find.  Here is a very early shot of some Marines around a homemade bunker.

The Flatboat as a teaching aid. 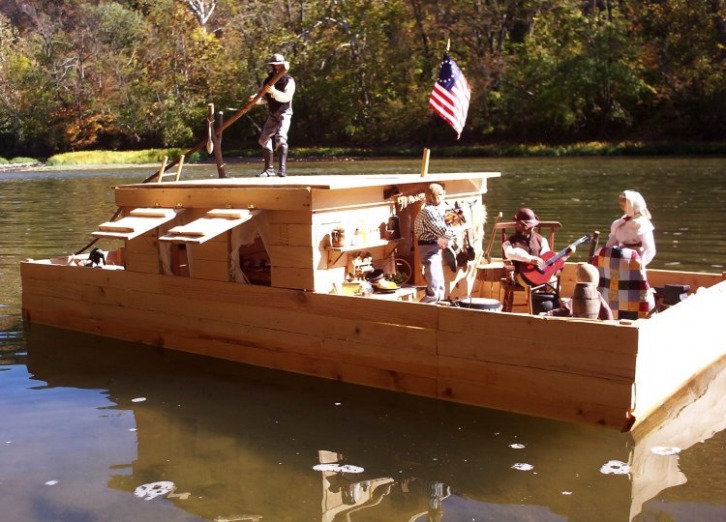 The flatboat is a scale example of a 30 footer, coming down the Ohio River back in the early 1800's.  Loaded down with everything they could carry, the flatboat size was based on how much you had to spend on the boat.  Once you reached your destination, the flatboat was dis-assembled and used to build a small house to winter the following season in.   My flatboat is used in schools when teaching 4th graders Ohio History. 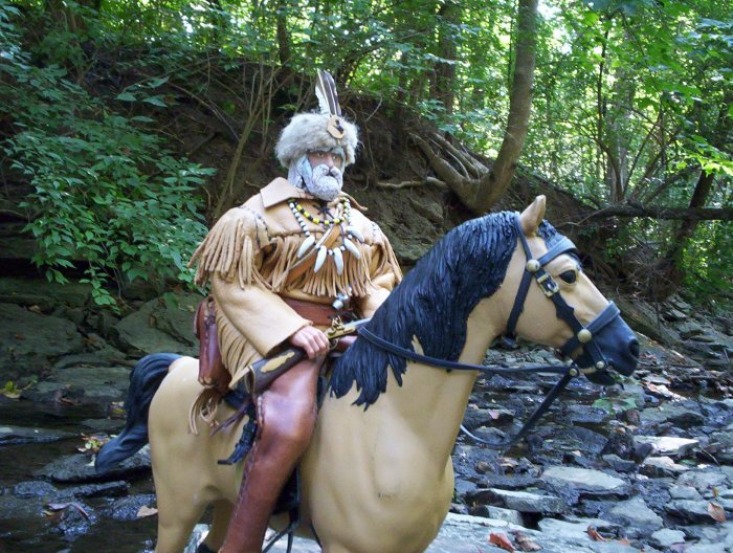 This was the first true custom figure I ever made.  Even the horse was customized and fitted with a prosthetic front leg.  In the summer of 2009 I accidently left this favorite piece behind after a photo shoot.  If anyone has any knowledge of my whereabouts, please contact me..
scale, figures, military, models